Protecting Turtles in the Pacific (Part 2) 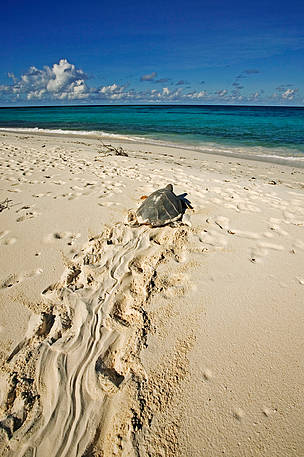 Climate change and its impact on sea turtles (Part 2)

A more contemporary problem protecting sea turtles is the impact of climate change.

“We’ve just done a study there was funded from one of our offices in Switzerland, which enables us to monitor the change in beach morphology of the nesting sites,” says Tamata.

“Because of climate change and sea levels rising, the high tide water continues to eat into and erode some of the key nesting beaches.”

Due to the increasing tropical cyclones and high storm surges caused by climate change, there is a significant loss of nests compared to 2014 and the assessment that was done this year.

Most nests were just buried because of the storm surges and the rest were just eroded.

Right now the sea turtles are moving in further to lay their nests so that they can protect their eggs from being washed away by the tides.

Further Protection of the sea turtles

“We have been working with the coastal communities and relevant stakeholders - government, NGOs, provincial administrations towards the protection of nesting sites,” says Mr. Tamata. “The sites are now included in the Marine Protected Areas (MPA’S).”

“Secondly, we’ve trying to encourage the replanting of coastal vegetation instead of bigger plants or coconut trees. Much of the coastal vegetation of these areas were cleared in order to accommodate for village community settings.”

“The third solution is letting the relevant officials or government organizations know the habitat of sea turtles. For Fiji, we have the sea turtle’s nesting areas and their migration routes areas mapped out so that in terms of development whether it be seabed mining or resort establishment or even tracking of fishing vessels – we are letting them know these areas are important for the sea turtles feeding and nesting.”

There are various laws to protect sea turtles in the Pacific. These are international laws as well as domestic laws.

CITES and the other is CMS are international treaties that Fiji has signed to.

Most of these laws have associated fines.

Under CITES, if anybody was caught the fine is FJ$20,000 or five years in prison or both.

“Whether the laws are sufficient or not is another problem,” says Tamata. “The first one is being able to enforce the laws and actually taking the person who has been convicted to court. That is something that Fiji and most of the Pacific islands have been struggling with, because in court the priority for conservation is not that high.”

“We are working with Fiji Environment Law Association to try and prioritize these as well.”

“To my knowledge there has only been one case that has been brought to court, we haven’t heard from the hearings of that case as yet. So that’s another challenge we are facing in terms of enforcement and actually penalizing someone who has been caught.”

A need for further 10 year moratorium for the whole of the Pacific?

“For Fiji alone, we have consulted with stakeholders in the northern and the western division and then a national consultation as well,” says Tamata. “From all of those consultations, everyone that were present - the community, stakeholders and even the tourism sector - all said that Fiji needs an extension of the moratorium.”

“This not only enables the government to keep track of and have control of the harvest but also it gives an opportunity to monitor the numbers that have been harvested for traditional purposes.

“For the rest of the Pacific, we found out through satellite tracking and monitoring the movement of most of the sea turtles that have been tagged in French Polynesia and New Caledonia were coming to Fiji to forage.”

“The pacific moratorium is a really good idea. We could start with the Hawkes Bill species. If we are going to move into a moratorium for the Pacific, SPREP is the regional body that has a plan in place. We could discuss this in 2020 and roll it out in 2021.”

“A moratorium for the Pacific is a good opportunity to explore because of the sea turtles movement and their migratory preference in terms of feeding and then travelling back to nest where they were born. It’s something good to explore and it would work if all the countries are eager and have a plan in place at first before moving to a Pacific moratorium.”

Need for a complete ban on turtle harvesting?

“If I had to prefer one of them, it would be to go with the moratorium. Complete ban takes away the opportunity to monitor, opportunity to collect data and it leaves us in the dark of what’s actually happening in our communities and the tourism side of things.”

WWF Pacific’s role in protecting turtles in the Pacific

Part of the role of WWF Pacific is getting relevant stakeholders together and considering ways in which they could better conserve sea turtles. They work with communities and raise awareness about sea turtle conservation and discuss alternative livelihood.

“We have a NZAID project that closely works with the Fiji Fishing Industry Association,” says Williams. “The project looks at developing sustainable tuna fisheries in Fiji.”

“One component of that project is developing a bycatch component to complement existing courses on fishing for Fiji Maritime Academy. The whole idea is to professionalize the tuna fishery to ensure that the crew members that join longline fishing vessels understand what types of bycatch mitigation are available and are mandated as well as how to use simple tools and techniques such as safe handling and release of turtles that will improve a sea turtles chances of survival if it is caught in longline fisheries.”

“We see this as a means of turtle conservation and addressing the issue of turtle bycatch. These crew members will be trained in the use turtle bycatch techniques and tools for ensuring the safe release of turtles if they get caught on the longline fishing vessels.”

“They will also learn to identify turtle species.”

Williams also talks of their work with the Western and Central Pacific Fisheries Commission (WCPFC).

The WCPFC is an international body that looks after fisheries issues in the Pacific mainly focussing on tuna fishing and it’s management. It also looks at the impact of fisheries to other species in this case the impact that fisheries has on sea turtles.

“The Conservation and Management Measure of Sea Turtles (CMM) came into effect on the first of January 2020, which offers greater protection of sea turtles through measures such as use of circle hooks, recovery measures for caught turtles, fishing avoidance measures (such as non-encircling of turtles in purse seine operations) and following the FAO Guidelines to Reduce Sea Turtle Mortality in Fishing Operations,” says Williams.

“So it’s important that while the focus is looking at national efforts to conserve turtles, we must also bear in mind that turtles are also migratory species and while it’s important that we address conservation at the national level (looking at key threats and drivers that occur within countries), the emphasis and importance of managing sea turtles within the mandate of, for example WCPFC, is equally important.” 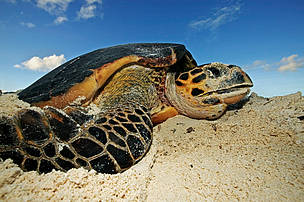 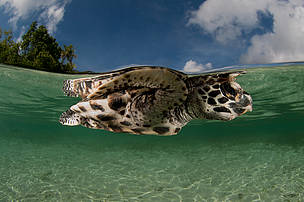 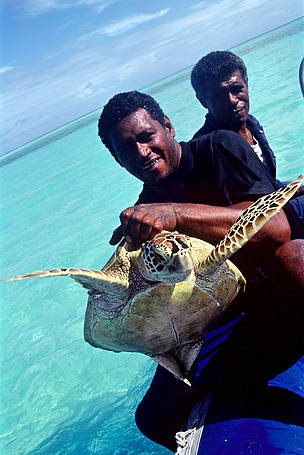 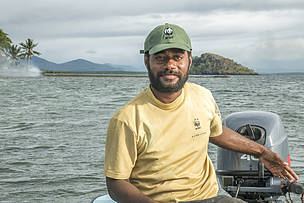 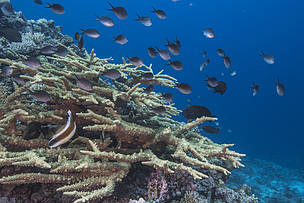 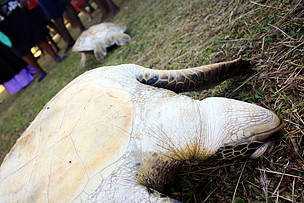 Two Green sea turtles (Chelonia mydas) were captured at a WWF community based workshop in a small village on the island of Vanua Levu to demonstrate flipper tagging to participants. Vanua Levu, Fiji.
© Matthew Hensby / WWF-South Pacific Enlarge
Like this article?