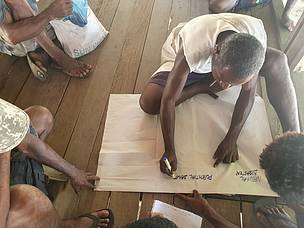 42 community representatives  were part of a Disaster Risk Reduction (DRR) workshop that aimed at working towards drafting their disaster management plans for three target Local Level Governments (LLGs). These were Almami LLG of Bogia District, Sumgilbar LLG of Sumakar District and Ambenob LLG for Madang District.

Organised by WWF-PNG, the Living with Change: Resilient Mangroves, Fisheries and People of Fiji and PNG project which  is funded by the German Government, empowered participants to gain knowledge and  understanding on the importance of disaster risk reduction which is targeted at enabling participants to become better informed and more coordinated in understanding issues such as climate change impacts and  its science; adaptation risks and hazards; disaster hazard vulnerabilities and capacities;and provincial risk profile.

“We are experiencing a lot of changes to our weather patterns,”said WWF-Climate Change Adaptation Officer Bonti Krasi.

He highlighted that the villagers of Almami, Sumgilbar and Abenob LLGs had drafted their disaster management plans which entails the challenges they currently face and the best practical solutions to protect and sustain their resources.

Krasi highlighted that one of the prime activities under the project  is to train key community leaders and government officials to have a sound understanding of  Disaster Risk Reduction and to assist in further developing and strengthening the ward/LLG and provincial disaster management plans.

“ The purpose of the workshop is three fold, we worked with stakeholders on drafting their disaster management plans; consulted with stakeholders on training community members and government representatives in DRR and equipping them to engage in further discussions for future DRR training for the ward/LLG and provincial level,” Krasi said.

WWF-Pacific’s PNG Coastal Marine Project Coordinator Rebecca Samuel adds that the goal of the Living with Change: Resilient Mangroves, Fisheries and People of Fiji and PNG project is to ensure that coastal communities and the critical ecosystems that sustain them in Papua New Guinea’s Madang coastline are increasingly resilient to climate change impacts, contributing to improved livelihoods and food security. 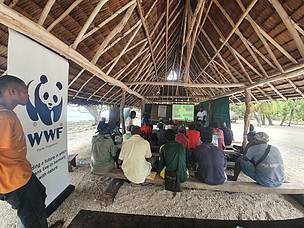 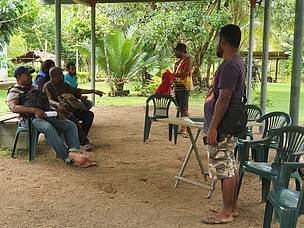 Community representatives during their group discussions on highlighting their challenges they face as a community and the possible solutions to their challenges.
© WWF-Pacific PNG Enlarge
Like this article?