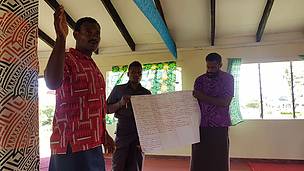 Paula Namu, Balevuto village headman (closest to the camera) during Ridge to Reef community workshop
© WWF-Pacific
Villagers of Balevuto in Ba are placing huge efforts towards reforestation activities in their bid to counter the effects of deforestation, climate change and improve food security.

In support of Fiji's 4 million tree campaign,community representatives have taken heed of the call to support the Ministry of Forestry  in its tree planting activities which  beganin in mid May last year.

This national exercise is further reinforced with the Fiji Global Environmental Facility 5 Star Ridge to Reef (R2R) management of water catchments  project for the two main islands of Vitilevu and Vanualevu which focuses on improved collaboration amongst resource owners and stakeholders towards identifying critical gaps and needs in biodiversity conservation for marine and land ecosystems.

Balevuto village headman Paula Namu says prior to the tree planting activity , forest cover had declined drastically in their district of Naloto due to unsustainable agricultural and logging practices.

"An important lesson that I have learnt is that we can rehabilitate areas that have been deforested by planting more trees and we are slowly witnessing the benefits in terms of our village becoming cooler and our soil health improving and I would like to thank the stakeholders for improving our capacity through workshop and on the site trainings," he said.

" We need to stop irresponsible burning and cutting off trees, in addition to reckless dumping off rubbish in our rivers,if we don't prevent this our future generations will suffer," he added.

Namu says that villagers have been supporting the Ministry of Forestry in planting fruit trees such as citrus, coconut trees and avacado for food security in addition to trees for future income generation purposes such as Mahogany, Teak and Sandalwood.

With Balevuto village located within Ba's Water Catchment, WWF-Pacific's Community Development Officer, Metui Tokece adds that villagers are keen  on more about the relevance and interdependence of nature's ecosystems and how best they can protect and sustain their resources.

His comments were further supported by Fiji's Ridge to Reef Project Coordinator for Vitilevu Noa Vakaceg who highlighted that the tree planting activities are the biggest and cheapest ways to combat climate change  and reverse declining forest cover.

" Trees provide many ecosystems services and environmental benefits for communities and the planet, as they grow the absorb and store carbon dioxide-which is a major driver for global heating," Vakacegy said.

From the tree planting activities, Namu highlights that village representatives have learnt alot and are committed towards supporting the greening initiatives.

"We have also learnt how to prevent soil erosion by planting more trees as well as setting up tabu zones (no go zones) within our rivers to replenish our fres water food sources in addition  to no planting within buffer zones, these are important lessons and its not easy  but we would have to make changes if we are to move forward towads greening our district," Namu said.

Working towards greening their water catchment area in Vitilevu.
© Lekima Tikoilau Enlarge
Like this article?