“There’s been some very good outcomes, and the first one is the adoption of the climate-change resolution. From the FFA members’ perspective, that is one of the key priorities we wanted to get out of this meeting, given that one of the things our ministers tasked us to advocate for at the WCPFC was to address climate-change issues in relation to fisheries.”

He said another great outcome was the continuation of the Compliance Monitoring Scheme (CMS) for the next two years.

“The compliance scheme ensures members are held accountable to their obligations and goes a long way to ensuring sustainable fisheries management for the region,” Mr Pangelinan said.

Mr Bubba Cook of the World Wildlife Fund paid tribute to Pacific leadership at the meeting.

He said that the climate resolution “demonstrates that in two consecutive years we have seen a measure that’s been passed – crew welfare in 2018 and now climate change – that is reflective of the leadership in the Pacific island members. The [show a] willingness to take on the tough and challenging issues and provide solutions to those issues, so we are very encouraged by that motivation.”

The Director-General for FFA, Dr Manu Tupou-Roosen, added and re-emphasised the importance of the climate decision. She pointed out its valuable role as a “starting point to increase the focus of the Commission in this critical space so we look forward to that active work in this area with all Commission members”.

She acknowledged the work by Pacific countries as well as other Commission members, “underlining that no one achieves anything alone. Our members have worked really hard including with all Commission members to get to the point we’re at tonight.”

Dr Tupou-Roosen also highlighted positive outcomes for other species that get caught up indirectly as fishers chase the tuna harvest.

“There have been some key outcomes to come out of this Commission related to non-target species. The mobulid rays conservation management measure (CMM) is a win for this Commission; also the adoption of a comprehensive sharks CMM that has taken two years to have adopted.

But some FFA priorities did not progress as well as hoped

But there were also a number of priority issues that did not progress as well as they should.

Mr Pangelinan said, “We were not able to agree on how we are going to proceed with the discussions in terms of the high-seas allocations. That’s something that has been somewhat watered down and now we are going to tackle it at the next WCPFC meeting.”

“We are very happy with the adoption of the mantas CMM. We think that was a big win for the Commission,” he said.

“But I think there was a very big missed opportunity for the Commission to establish a dedicated meeting for scientists and managers to meet to discuss the issues around harvest-management strategies to further progress that part of the Commission that will lead to a more sustainable management of the stocks into the future.”

“We think there was some significant progress around a number of issues at the meeting, specifically around harvest-strategy development, but we also remain concerned that some of the measures were not quite as robust as they could have been, particularly for the sharks CMM.

“We have one of the most endangered stock of sharks here in the Pacific with the oceanic whitetip and there were a couple of provisions that would have gone a long way to help with sharks and ensure the long-term sustainability of those stocks. But at the same time there was a great amount of effort that went into the CMM for sharks and it reflects a lot of willingness to compromise around the table, and I certainly would like to acknowledge that as well.

“The manta and mobulid [rays] CMM was also a big step and we are certainly happy to see that move forward.”

Although there was no movement in the skipjack target reference point (TRP) negotiations that are important to members to the Parties to the Nauru Agreement (PNA), there was no harm done, according to Chief Executive Officer for the PNA Office, Mr Ludwig Kumoru.

“Overall, we are happy with the outcome of this Commission meeting,” Mr Kumoru said.

“Our major objective was on the TRP. It may be seen as a push back, but for PNA it is still acceptable, we still have time to work on it. I think if we rushed it and got to a decision where we wouldn’t be comfortable then we would be in a very difficult position. So, we are comfortable with the outcome. The stock is not in the red; it is in the green we can still buy some time and look at ways to address it.”

Looking to the future

In summing up, Mr Pangelinan said, “The Commission has done very well in discussions about future tools that the Commission wants to use to improve monitoring. And two of those are electronic reporting and electronic monitoring. From the FFA perspective, these are important tools that will help fill the gaps in the data from fishing on the high seas in particular and the longline operations.

“So that is something that we also want to highlight: that adopting/agreeing to the objectives here, was a big step to progress the work of the Commission.”

WCPFC adopted a resolution on climate change based on the draft that was put forward by FFA members at the start of the meeting. This was a significant milestone for the Commission and a great success for FFA Members. The resolution responds to the call from Pacific Islands Forum leaders for increased attention, including in scientific research, to be placed on the impacts of climate change on the region’s highly migratory tuna stocks.

The non-binding resolution also looks at the links between fishing activity and climate change, and for the Commission to consider options to reduce the environmental impacts related to headquarters operations and meetings.

FFA members’ proposal to reform the WCPFC Compliance Monitoring Scheme was one of the hardest issues discussed at WCPFC16.

Cook Islands led the charge for FFA members and, after extensive negotiations, agreement was reached on the last day to a revised measure which focuses compliance monitoring on the implementation of measures by members rather than delving into the detail of individual cases involving fishing vessels that are the better dealt with through other mechanisms.

This was a significant achievement for FFA members, and should see the WCPFC compliance-monitoring process remain the strongest of all the tuna regional fisheries management organisations (RFMOs). The measure agreed to applies for two years, giving time for additional work to take place on additional elements of the scheme including a refinement of audit points and the development of a risk-based framework.

There were two informal meetings, chaired by Fiji, of the small working group to discuss the way forward for South Pacific albacore tuna.

The terms of reference and the work plan for the South Pacific albacore roadmap process were progressed, with a focus on rebuilding stock so that catch rates improve. This will assist in improving the economic viability of the fishery.

The roadmap group will hold two face-to-face meetings in 2020, in the margins of the Scientific Committee meeting in August and the Technical and Compliance Committee meeting in September. This should ensure good progress is made before the Commission considers a revised measure in December 2020.

While there was general agreement to the proposal from FFA for the WCPFC to hold a two-day workshop to discuss high-seas limits and a framework for allocating those limits, agreement could not be reached on the terms of reference for a workshop. This highlighted how difficult it is going to be reach agreement on allocation within the Commission, especially since allocation decisions can only be taken by consensus. In the end, WCPFC16 agreed to extend the next annual meeting by two days so that time could be devoted to this issue.

The Transhipment Intersessional Working Group (IWG), co-chaired by RMI and US, made some good progress, but further work remains to finalise the scope of work for a study to identify weaknesses in the existing measure.

A small number of fishing nations remained concerned about the information that would be made available to conduct the study, and this has unfortunately delayed the process. The IWG will continue its work electronically, with the aim of finalising the scope of work as soon as possible.

FFA members proposed the draft conservation and management measure (CMM) for mobulid rays (such as manta rays), and this was adopted by the Commission following constructive engagement by Commission members. The measure will come into effect in 2021, to allow Commission members time to promulgate the measure with their fishing industries.

After two years of lengthy negotiations, chaired by Japan, a comprehensive measure on sharks was finally agreed. The new measure rationalises and streamlines reporting that was previously spread across a number of different CMMs. There was also some strengthening of the standards around requirements that fins remain naturally attached to shark carcasses with simplification of alternative measures to ensure that they can be monitored and enforced.

Note: Lealaiauloto Aigaletaule’ale’a F Tauafiafi’s participation and coverage at the WCPFC16 was made possible by the Forum Fisheries Agency, Pew Charitable Trusts, and GEF OFMP2 project. 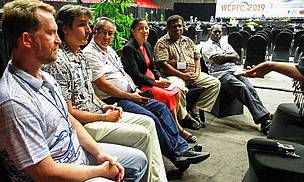 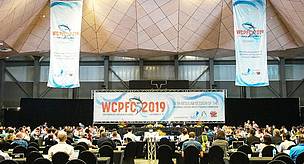 WCPFC Chair Jung Riley Kim brings the 16th meeting of WCPFC to a close.
© Fatu Tauafiafi Enlarge
Like this article?