Climate Change is still a challenge 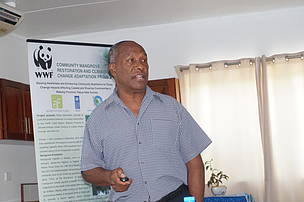 The Dean of University of Papua New Guinea’s School of Natural and Physical Sciences, Prof Chalapan Kaluwin speaks on the effects of climate change on coastal fisheries.
© Rebacca Samuel / WWF-Pacific
A climate change expert is in the process of formulating a framework that will address issues of climate change and adaptation within coastal communities in the north coast of Madang.

The Dean of University of Papua New Guinea’s School of Natural and Physical Sciences, Prof Chalapan Kaluwin, said they would come up with a framework to address climate change and adaptation issues that would be rolled out to coastal communities in Madang, Sumkar and Bogia.

Kaluwin said climate change was one of the biggest challenges that should be addressed when managing fisheries in the Pacific.

He said it would take the whole of this year to formulate, manage and implement adaptation measures outlined in the framework.

Kaluwin said this in a week-long workshop conducted by his faculty and facilitated by World Wide Fund for Nature (WWF).

According to WWF’s marine programme coordinator, Rebecca Samuel, the secretariat of the Pacific Community (SPC) had given a guideline on the management of fisheries which they were using under the community based fisheries management project.

Samuel said WWF has been working with communities for many years and with the collaboration of UPNG experts, they would use the framework to address issues of climate change and adaptation affecting fisheries at the village level.

She said WWF had come to a stage in its community fisheries management project where there was a need to review the guide so that it captured some issues that communities were facing in relation to climate change.

Samuel said the revised guide including climate change aspects, would be sent to the SPC.

Community leaders who attended the workshop expressed concern with the lack of understanding and awareness of climate change issues.

Mathew Mirak, from Malala in Bogia, said there needed to be more awareness and education. 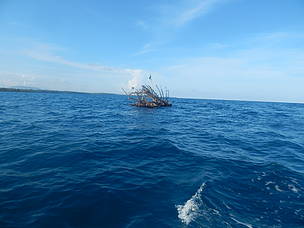 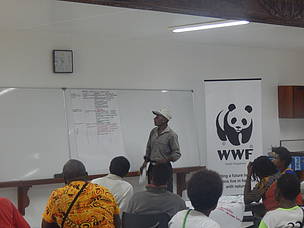 Participants listening to a community representative at the University of the Papua New Guinea.
© Rebacca Samuel / WWF-Pacific Enlarge
Like this article?