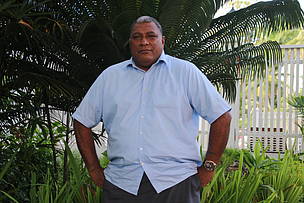 Community Conservation Champion, Tui Macuata, Ratu Wiliame Katonivere.
© WWF-Pacific
“I am the traditional leader of a province; I have been bestowed the responsibility of not only the livelihood of the community but also the upkeep of all the resources ,  the flora and fauna, from the ridges to the reefs , and  everything that falls within my province; it’s my responsibility to ensure that it is protected and enjoyed.”

Community Conservation Champion, Tui Macuata, Ratu Wiliame Katonivere highlights that his responsibility  as traditional leader of the province of Macuata  is not only limited to the wellbeing of his people, but also the protection, wise management and proper use of the province’s natural resources for a sustainable and resilient future.

His words on responsibility in safeguarding our natural resources echoes the commemoration of World Wetlands Day which is celebrated annually on February 2nd and this year’s theme “Wetland Biodiversity- Why it Matters”.

Wetlands Day since its inception in 1997 has focuses  on raising  awareness on the vital role wetland ecosystems provide in terms of sustaining our people and economy.

Some examples of wetland ecosystems in Fiji are our catchments and cloud forests, rivers and streams, marshes, freshwater ponds and lakes, mangroves, sea grass meadows, and coral reefs.

Such ecosystems provide us with food and water, income, support agriculture, build our resilience against impacts of climate change, and protect us from storm surges to name a few.

The province of Macuata is where Fiji’s Great Sea Reef (GSR) begins; from Udu point and spans a vast 200 kilometers of unbroken pristine barrier reef which stretches all the way through to the Yasawa islands and coral coast.

The GSR is the third longest reef system in the world and the Macuata portion of the reef has been identified as one of the world’s top 50 resilient reefs.

This means that Fiji’s Great Sea Reef is able to recover quickly from impacts of climate change such as coral bleaching, and storm disturbances. A section of the Great Sea Reef, the Qoliqoli Cokovata of the Districts of Macuata, Dreketi, Sasa and Mali, was identified as a significant wetland area and declared a RAMSAR site in 2018

This area  harbours mangrove forests, seagrass meadows and mudflats, which are transition points for migratory species such birds and sea turtles, and also encompasses scattered freshwater ponds on land which contain kuta (freshwater reed) which are woven into mats seasonally by women in the area. These traditionally crafted mats are highly prized for special iTaukei occasions.

“My job is to have that continuity of what my forefathers have done by carrying that beacon for a sustainable future, so that the community sees it and they will follow, for me it’s just something that I am responsible for,” he said.

Ratu Wiliame adds he takes special care of his role as leader, and while individuals must also take responsibility in caring for their environment, they each need to understand the important role wetland ecosystems play in providing for our sustenance.

“Our waterways are compounded by the flow of waste water, soil erosion and plastic pollution, overfishing and other abuses of ocean resources”, he added.

He added that working towards the promotion and protection of the reef was no mean feat and encourages everyone to always reconsider the value of forests, rivers and streams, mangrove forests, sea grass meadows, marshes and coral reefs.

In January 2018, Prime Minister Voreqe Bainimarama launched the International Year of the Reef and announced the Fijian government’s approval for the nomination of a section of the Great Sea Reef (Qoliqoli cokovata) as Fiji’s second Ramsar site under the Convention on Wetlands.

“I remember the day, the Prime Minister had to reschedule his programme to come to one of the small islands just off my coast to launch the International Year of the Reef, Ramsar site, that is why I will support him,” he said.

“My vision for the future is to see that we have more than enough fresh, nutritious food, we will have enough fish to eat, we will still have our pristine forests and more cleaner water running through those streams, we will have sustainable development, where the community has the power in decision making and governance of their natural resources within their land and their rivers and qoliqoli,” Ratu Wiliame Katonivere said.

He adds that mindsets need to change for the better in viewing wetlands as priority ecosystems that provide values no other ecosystem can and these include natural water quality improvement, flood protection, shoreline erosion control, opportunities for recreation and aesthetic appreciation as well as natural products for our everyday use with no cost at all. 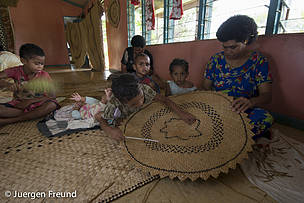 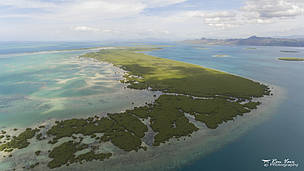 Aerial picture of theTalailau mangrove island that is part of iQoliqoli Cokovata, in Macuata.
© WWF-Pacific / © Ron Vave Enlarge
Like this article?