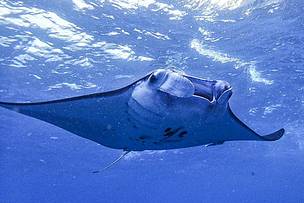 The resolution that requires fishers to immediately release any manta rays caught accidentally as “bycatch”.
© Manta-ray_Sasuke-shinozawa_CC-BY-SA

The Western and Central Pacific Fisheries Commission (WCPFC) took a major step in helping to protect “threatened” manta and other mobula rays on the final day of its annual meeting on Wednesday.

It adopted a resolution that requires fishers to immediately release any manta rays caught accidentally as “bycatch”.

An international fisheries officer of Pew Charitable Trusts, Glen Holmes, said the increased protection was one of the positive outcomes of the WCPFC meeting, which was held in Port Moresby.

Mr Holmes said the action is considered a “big win” from the commission meeting.

“WCPFC agreed to increase protections for threatened manta and mobula rays by banning purse-seine and longline vessels from keeping any caught in their nets and hooks. This is a positive step and helps remove the incentive for fishers to capture and keep these imperilled species,” Mr Holmes said.

Pacific Islands Forum Fisheries Agency (FFA) members were the proponents of the proposal for a new measure to prevent targeted fishing and retention of mobulid rays, and to promote their safe release, when they are caught in WCPFC convention area fisheries.

FFA Director-General Dr Manu Tupou-Roosen said that the protection of rays is one of the “excellent” outcomes of the WCPFC meeting.

To many island nations such as Palau and FSM, manta-ray watching is a big tourism draw. There is also global plea to protect rays, which not only get tangled in nets and fishing lines but are also targeted for their meat and gill plates.

Under the measure, purse seiners are required to release rays while they are still swimming freely, with rays that are too large to be lifted safely by hand to be brailed out of the net and released using a purpose-built large-mesh cargo net, or canvas sling or similar device.

Purse seiners and longliners are also banned from dragging, carrying, lifting or pulling a ray by its “cephalic lobes” or tail or by inserting hooks or hands.

Bubba Cook, the head of WWF’s delegation to the WCPFC16, said WWF was happy to see that the manta rays measure move forward.

Note: Bernadette Carreon's participation and coverage at the WCPFC16 was made possible by the Forum Fisheries Agency, Pew Charitable Trusts, and GEF OFMP2 project.

The resolution that requires fishers to immediately release any manta rays caught accidentally as “bycatch”.
© Manta-ray_Sasuke-shinozawa_CC-BY-SA Enlarge
Like this article?