WWF, SPREP partnership to strengthen conservation in Fiji and the region | WWF

WWF, SPREP partnership to strengthen conservation in Fiji and the region 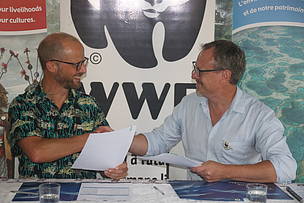 This will include collaborating on initiatives related to ecosystem-based adaptation or nature based solutions; threatened, endangered and protected migratory species; planning, monitoring and communications for conservation; biodiversity of the deep sea; regional and international policies including Multilateral Environmental Agreements; wetlands and Ramsar; marine spatial planning and integrated ecosystem management.

Speaking at the signing, Dr. Rawson welcomed the partnership as a great contribution to advancing environmental work at the national and regional levels.

“WWF and SPREP have collaborated over the years on issues that are affecting the Pacific, with a focus on communities and biodiversity. Today’s renewed MoU is a testimony to our shared commitment to deliver national, regional and international conservation priorities and addressing issues including threatened species protection, reduction of bycatch fisheries and community adaptation to climate change,” said Dr. Rawson, Interim Director of WWF Pacific.

The work outlined by the renewed MoU will also further strengthen WWF’s support to its project sites in Fiji’s Great Sea Reef Land and Seascape, the Solomon Islands and Papua New Guinea.

The Acting Director General of SPREP, Mr. Roger Cornforth highlighted that SPREP valued the shared partnership with WWF over the last five years.

“Together we have worked to support the conservation priorities of our Pacific Members through the Regional Framework for Nature Conservation and Protected Areas in the Pacific Islands Region 2014 – 2020, including the conservation of turtles in Fiji, of dugong and seagrass in the Solomon Islands, and of sharks and rays throughout the Pacific, which has featured successful listings on CITES, promotion of shark sanctuaries and guidelines for in-water encounters. SPREP values the information and analysis that WWF contributes to our Pacific conservation partnership. Reporting such as WWF’s economic analysis of the blue economy in Melanesia adds significant value to the regional conservation effort and shows the value of our close collaboration for our Members. We look forward to continuing this partnership, working together to help the regional struggle to halt the decline of biodiversity and best manage the impacts of climate change on our Pacific environment, cultures and livelihoods,” added the Acting Director General of SPREP.

One such project is the current joint implementation of the Pacific Ecosystem-based Adaptation to Climate Change or PEBACC project in the province of Macuata on Fiji’s largest customary fishing ground (qoliqoli) and only Ramsar designated wetland area, iQoliqoli Cokovata. An objective of the MoU will be to explore opportunities to expand Ramsar designation to other parts of the Great Sea Reef. Fiji’s Great Sea Reef is the third longest continuous reef system in the Southern Hemisphere.

The partnership will also strengthen continuous collaboration on conservation and management through monitoring and protection of bycatch species such as sea turtles, sharks and rays and sea birds within Fiji and the Western and Central Pacific Ocean region. 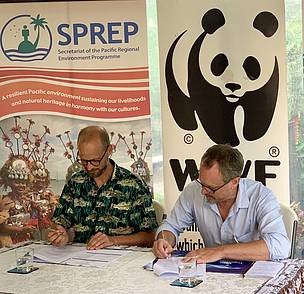 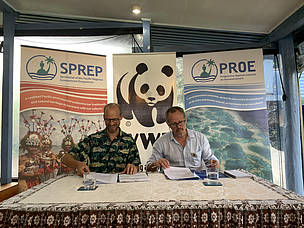 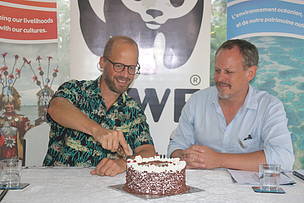 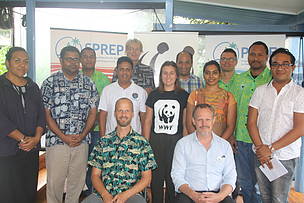 WWF Pacific and SPREP staff part of the MoU signing posing for a group photo.
© WWF Pacific Enlarge
Like this article?