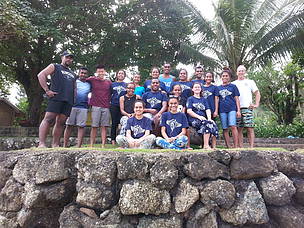 The baby Pandas visited a Marine Protected Area at Votualailai Village, one of five locally managed conservation sites along the Korolevu-i-wai District of the Coral Coast. Thanks to the management and planting efforts by Reef Explorer Fiji, the coral and fish in this area are thriving. Colourful schools of tiny fish dart in and out of coral clusters, giant clams rest under the gardens, larger fish dart deeper into the ocean as the people swim nearby, and everywhere is dotted the colours of newly planted coral along the ocean floor and on older, darker coral ledges.

Corals are the foundation species of the reef ecosystem, the beginning of the food chain. When coral are healthy, fish thrive, and when fish thrive, so do the people who rely on the harvest of fish for their livelihoods. The baby Pandas viewed coral gardens growing on concrete discs and ropes using a process called fragmentation. Fragments of coral that have broken away are still alive and can attach themselves to a new base and continue growing. The Reef Explorer Fiji Ltd team are planting samples from coral that survived the high ocean temperatures in 2016 to grow heat-resistant corals. These will be moved around the reef and lagoon, building up new coral blooms that will better withstand the threats of climate change.

For every dollar invested in protecting the reef between 2002 and 2011, it earned back $13 in value to the surrounding area. Such profound improvements give hope to rejuvenating a reef that was thriving as recently as the 1970s but which recently has become over-fished, overgrown with algae and damaged by the impacts climate change. Climate change has contributed to harsher and more frequent storms which have torn at the coral, heated the ocean, bleached the coral, killed fish and washed topsoil into the sea.

Victor showed the volunteers how to tie the concrete discs to the frames for coral planting and they quickly got to work setting up 400 bases ready for the next round of planting. They came away with a renewed hope for the preservation of Fiji's valuable marine resources and a greater appreciation for the work that lies ahead. A great way to celebrate World Oceans Day. 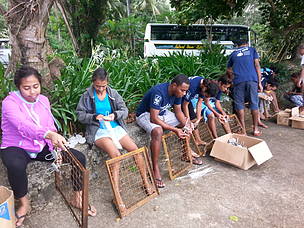 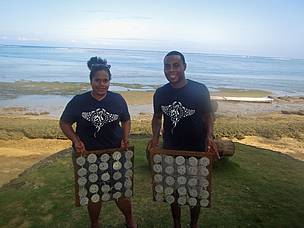 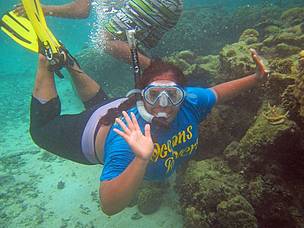 Exploring the reefs at Reef Explorer Ltd
© WWF-Pacific Volunteers Enlarge
Like this article?