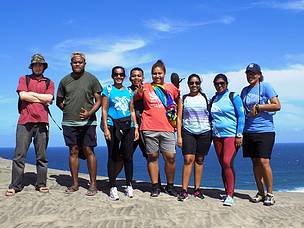 WWF-Pacific Volunteers at Sigatoka Sand Dunes
© WWF-Pacific Volunteers
A still dawn saw two dozen of WWF’s intrepid baby pandas embark from Suva for a day of conservation, sun and sand at the Sigatoka Sand Dunes. Park Ranger Jason Tutani welcomed the team on a shaded open lawn between the new conservation centre museum and offices. He outlined the day’s plan; four teams would work together to select and pot seedlings from the forest floor in one region, ready for the Rangers to replant in an area being reforested. Due to high demand on the Ranger’s time, this work was warmly welcomed from the volunteers, who in numbers could achieve it in short time. The teams would also collaborate in clearing washed up plastic debris from the beach, the inevitable outcome of Sigatoka’s pounding waves and strong currents. The ongoing efforts of WWF volunteers over previous years have supported the park to keep this area tidy.

With Jason in the lead, they ascended the steep stairs heading up the grasslands skirting the sand dunes. Only 10:30 in the morning, the sun was already beating down where the track wasn’t shaded. The track being the fire break mown flat between the five-foot-high seed grasses waving gently in the breeze; a necessary part of a dry landscape easily threatened by run-away fires. At the highest point of this track Jason surveyed the landscape drawing attention to the jutting rocks (Volivoli Cave) in the middle distance; evidence of coral and tides from an earlier era. From here the ocean became visible too, and the first sight of the rolling white sand dunes.

The threshold to Driodrio forest was met with sighs of relief as the branches blocked the direct sun. A peaceful place of rest, and a gateway to the spirit-world, according to the neighbouring village. A place where wanderers could get lost, misled by the small creatures (Leka)supposedly dwelling there. The dappled light danced on the red-berried underbrush, and flitting butterflies enhanced the magic.

Deeper in the forest, the teams got to work seeking out the small seedlings of the Candlenut (Toto) tree. They worked diligently, some people filling planting bags with soil, some delicately unearthing the seedlings, others gently planting them into the bags and arranging the completed work. With a total of over 120 seedlings prepared, Jason was ecstatic. A nearby forest, lost to a blaze, would be replanted with these seedlings and restored.

Onwards through the forest and the dunes spread out ahead, in all their vastness. The team ran up the shifting sand slope calling encouragement to each other and laughing at the effort. Higher up the slopes they climbed, to the summit. The bravest pandas sprinted to the edge, throwing themselves high into the air as the dunes fell away beneath them, and then landing, their momentum throwing up cascades of sand. Again and again to whoops and laughter and cheering.

Then down the steep slope to the beach. Sticks and logs, smoothed from the pounding waves lay strewn across the sand. Together, the pandas retrieved bottles, plastics, bags and other litter from between the wood, filling several black bags, as they casually strolled along the beautiful shoreline to the sound of the waves. Some stopped to inspect sites selected for archaeological investigation; ancient burial sites being slowly unearthed by the shifting terrain. Cultural sites protected within the confines of the National Park.

A path opened from the beach into the Mahogany forest. Child-sized “Tree-huggers” artistically woven from twigs wrapped their arms around the trunks lining the path. Back at the base, tired pandas sat in the shade, pouring sand from their shoes and pockets, wiping off their faces and arms. Museum viewing, volleyball shooting and lunch filled the afternoon before the bus made its way back home.

A successful trip which developed new skills and knowledge for the team while supporting the ongoing conservation work of the Sigatoka Sand Dunes and surrounding forests within one of Fiji’s first National Parks. 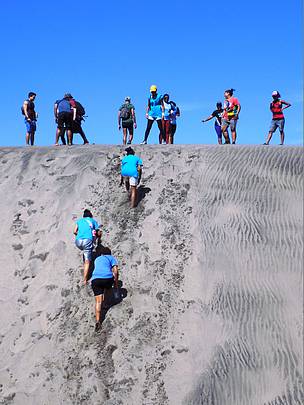 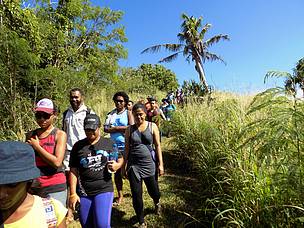 The track being the fire break mown flat between the five-foot-high seed grasses waving gently in the breeze; a necessary part of a dry landscape easily threatened by run-away fires
© WWF-Pacific Volunteers Enlarge 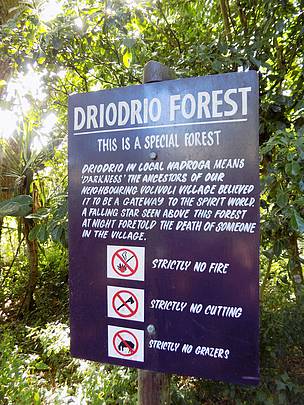 The threshold to Driodrio forest was met with sighs of relief as the branches blocked the direct sun.
© WWF-Pacific Volunteers Enlarge 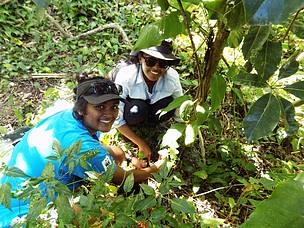 Deeper in the forest, the teams got to work seeking out the small seedlings of the Candlenut (Toto) tree.
© WWF-Pacific Volunteers Enlarge
Like this article?