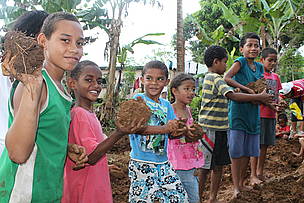 Children of Villa Maria crumble soil to whilst preparing the community vegetable gardens for planting
© WWF-South Pacific
It was the 24th of November and Nina’s tiny fingers made quick work of the huge lumps of soil, disintegrating it into smaller lumps, which fell onto the vegetable plot below.

She wasn’t alone. Something of a troop leader, the 20 other children of Villamaria, crowded around the new vegetable plot and followed suit.

Their oohs and aahs over earthworms, and other creatures that inhabit the soil, and incessant chatter filled the air in a cacophony of delightful sounds - the atmosphere palpable with their excitement. Vegetable gardening hadn’t been more exciting.

The project embodies the principles of greening, sustainable land management and promotes alternative sources of income through gardening and recycling.

Apart from rendering benefits that include food security and a possible income source for the community, involving the children with the mean age of 10 years, imbued in them an appreciation for backyard gardening and protection for the environment.

Villamaria, in case you didn’t know, is located along Mead Road, within the general Tamavua area of Suva.

The 25 families that occupy the five acres terrain are descendents of Wallis and Futuna immigrants, who with their bare hands, built famous landmarks of the Catholic Church that includes the Sacred Heart Cathedral and the Home of Compassion more than a century ago.

The land is a gift from the Catholic Church of Fiji.

Eight year old Nina Lawrence Catherine Berwick who lives with her grandmother is wise beyond her years and understands only too well the importance of gardening.

“It was so much fun today. It is important to grow plants. It makes our home greener and beautiful. I like gardening and help my uncle in his garden every day. If we grow plants we will be provided with healthy food which will make us strong.”

A natural leader, Nina led the children, some older, in lifting wooden planks that will held up fencing to protect the garden. They crumbled the soil, ever so careful not to harm earthworms and soil organisms vital for the healthy growth of plants.

At the same time they fired a million questions at Unaisi Malani, WWF South Pacific’s Sustainable Landuse and Livelihoods Officer and their ‘Aunty Sia’.
“Earthworms make the soil healthy by mixing it with minerals and aerating it,” Malani patiently explained for the umpteenth time.

Nina said: “Aunty Sia told us not to harm the earthworms because they help us grow the plants. They move around in the mud, and give more air to the roots in the soil. Aunty Sia also says that we can sell these plants when they are grown and have more money for our school.”

‘Aunty Sia’ is Teresia Powell a volunteer for WWF South Pacific, who resides at Villamaria and the inspiration behind the setup of the garden and recycling project there.

The projects are linked and self-sustainable. Income from the sales of PET bottles will be used to buy more seeds for the garden and the eyesore that is litter is resolved.

“With the help of recycling bags, it should revive some awareness of the dangers of improper disposal. This will also help the community members to take pride of their environment and educating sustainable livelihoods to their children,” Powell said.

“The volunteers are mostly fresh graduates and involving them in these kinds of projects gives them an inkling of what it’s like out in the real world beyond all the paperwork and exams. It encourages working together to achieve goals and objectives using limited funds that they have as they fundraise for their activities.”

By the time the volunteer van pulled out of Villamaria, a vegetable garden, two compost bins and a PET bottle collection bin had been set-up.

Hope has also been planted with the promise of alternative sources of income as the garden and recycling project grows.

More than that, a fire for the protection of the environment had been lit in the hearts of Villamaria residents, especially in the little ones who will fan it into fiery actions for the environment, far into the future. 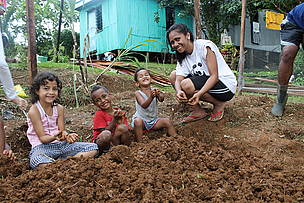 Eight year old Nina Berwick with her friends at Villa Maria brought the community garden alive. WWF South Pacific Sustainable Land Use and Livelihoods Office Unaisi Malani spent the day sharing the wonders of gardening and organisms living in the soil with the children of the settlement.
© WWF-South Pacific Enlarge 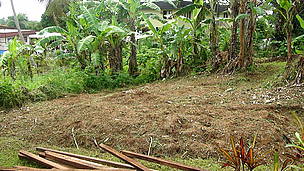 The blank canvass, before the garden sprang forth as children, WWF South Pacific and Villa Maria residents worked together to make it happen
© WWF-South Pacific Enlarge 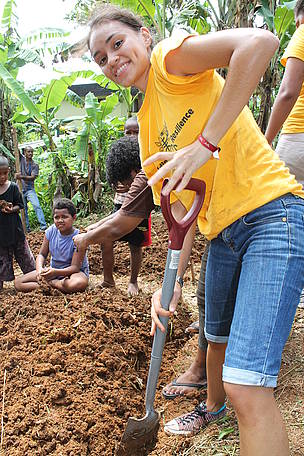 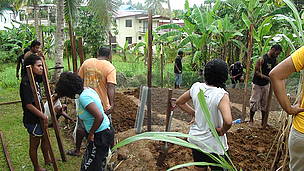 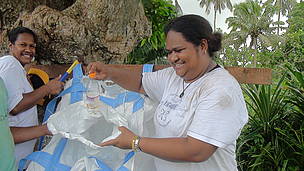 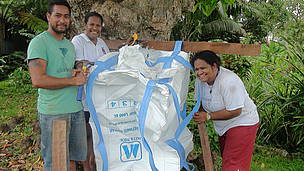 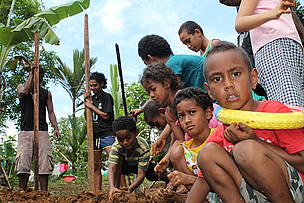 The children made gardening very exciting
© WWF-South Pacific Enlarge
Like this article?