To the Sand Dunes We Go ! 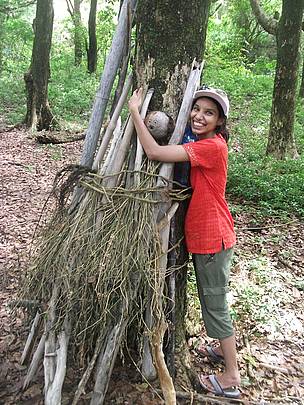 Anything can happen anytime! Just a month ago I was struggling between choosing two very appealing offers, both from renowned environmental non-government organisations, and in the blink of an eye here I am at the top of the Sigatoka Sand Dunes. Feeling the breeze run through my body and witnessing the most breathtaking sights in the Fiji Islands is a far cry from the towering sky liners that I see everyday back in Dubai. If you’re as curious as I am, join me as I accompany the WWF-South Pacific volunteers on a trip that will change the way you think about everything.


To celebrate International Youth Day this year, the WWF-South Pacific volunteers threw over their weekend to pay tribute to nature. ‘The National Trust of Fiji Sigatoka Sand Dunes National Park Volunteer Programme was organized by WWF-South Pacific to mark the beginning of the second phase of its volunteer program. WWF has played a vital role in engaging youth in activities recognizing them as agents of change and future of tomorrow and this rings true for all WWF volunteers globally.

The journey to the Sigatoka Sand Dunes began at 6.30pm on a Friday evening from Suva. My camera became my most valuable possession as I scrambled to capture every scene that came my way. The National Park is located at the mouth of the Sigatoka River on the island of Viti Levu covering approximately an area of 650 hectares. These dunes were designated as Fiji’s First National Park under the management of the National Trust of Fiji islands in 1989.

By the time we reached night had already fallen-and a generous sprinkling of bright stars stretched across the black velvet sky- indeed a sight which we don’t get to see in the city. I confessed to my colleague that I had never seen so many stars in the skies before, that I had never been out in the wild and most embarrassing of all, never swam in the seas.

Before dinner was served, a briefing with National Trust of Fiji islands Sigatoka Sand Dunes National Park took place and all the volunteers were well informed on what they will be doing the next day. I could already feel the excitement in the air!

The next morning we were up to an early start, with preparations to travel to the sand dunes well underway without having eaten breakfast and at around 8.00amthe volunteers retreated. The National Park rangers met the group in the dunes and 2 hours of hiking took prelude. One of the rangers guided us into the forests and across the peaks of the dunes. Up and down and down and up-we all went along the swirling paths. When we finally reached the top, a brief history of the dunes was accorded to the group of volunteers spanning the formation of the dunes dating back to Lapita civilization some 3000 years ago.

After the refreshing walk, breakfast was served to prep up the group for ‘yet to come’ activities. Food had never tasted better than it did on this occasion. The group then marched back to the Dunes for the planting of several species of plants including Bokai and Candlenut with a total of 50 plants planted in Naihema. The wildlife in the Dunes is a blend of endemic and introduced plants, which include 22 species of birds - of which 8 are endemic to Fiji, lizards, geckos and fruit bats.

We were soon after blessed by the heavens as rain completed the description of a typical tropical rainforest. Everything around us sparkled with the glisten of water and the forest looked even more lush green. Soon after the rain receded, the volunteers were off - this time into the Mahogany forest to create sculptures of tree huggers from vines and sticks. The history behind the concept of tree huggers is a beautiful tale of courage and boldness, recounted in the story of the brave ladies in India who clasped the trees when loggers had come to cut down the forests.

Our day ended with dinner concocted by the volunteers, followed by a series of interesting ice-breaker activities hosted by the WWF team. The evening ended with serious discussions centered on planning for the next phase of the Volunteer Programme. We left on Sunday morning, in high spirits and a feeling of contentment for having accomplished so much.

As for me - I have left my heart somewhere in the midst of the sand, trees and surf. 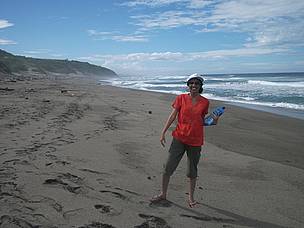 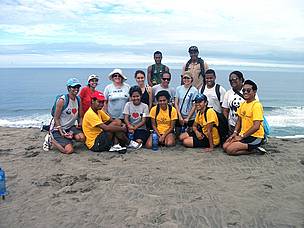 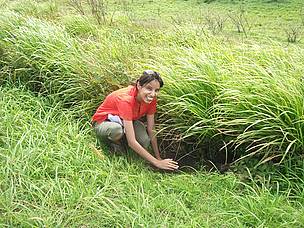