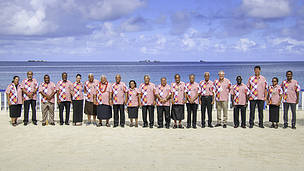 The latest in a growing wave of political commitments that aim to stem the tide of global marine plastic pollution, the Pacific leaders’ declaration is backed by a regional plan - the Pacific Marine Litter Action Plan (2018 – 2025). Notably, the first action listed is to support the development of a global treaty to address marine litter and microplastics.

“Through no fault of their own, the Pacific states and territories are currently on the receiving end of much of the world’s marine plastic pollution. Even the most remote, uninhabited and previously pristine islands now have their beaches utterly covered in plastic waste. While the region may be small, the message its leaders have sent here is loud and clear: plastic pollution is a global problem, and we need a global solution now,” said Alfred Ralifo, Great Sea Reef programme manager at WWF Pacific.

The Pacific Marine Litter Action Plan lays out regional waste management strategies both on land and at sea, including plans to develop compliance frameworks for cruise ships, as well as shipping and fishing vessels.

However, at least 80% of marine plastic pollution comes from land-based sources, amounting to over 2,480 billion pieces of plastic estimated to be floating in the Pacific Ocean – an overwhelming portion of which is contributed by countries that are not in the Pacific.

“It is clear that actions need to be taken at the global level to ensure solutions are agreed and implemented at a scale that is commensurate to the size of the problem,” said Eirik Lindebjerg, WWF’s global plastics policy manager.

Closely linked to the degeneration of coral reefs and loss of marine biodiversity, marine plastic affects fisheries and tourism, threatening coastal livelihoods, food security and economic development, compounding the disaster risks that the Pacific region is already facing due to climate change. In March, the UN Environment Assembly saw over 50 countries supporting the call for a global treaty, followed by the environment ministers of the Nordic countries, and heads of governments of 15 Caribbean nations and territories this July.

“Now is the time for other world leaders and policy makers, especially in Asia Pacific, to join the growing chorus of nations calling for a global treaty. This is the best and only chance we have of arresting the plastic crisis before it spirals further out of control, whether it be in our oceans and waterways, our landscapes, or even in our bodies,” said Lindebjerg. 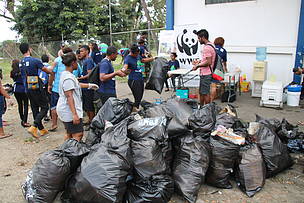 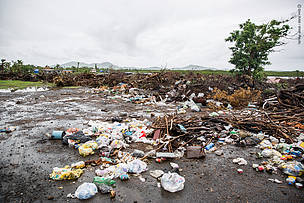 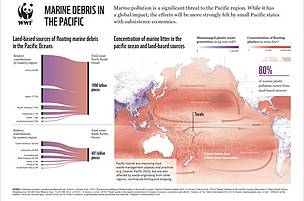 Infograpahic showing the amount of plastics in the Pacific region.
© WWF-Germany Enlarge
Like this article?