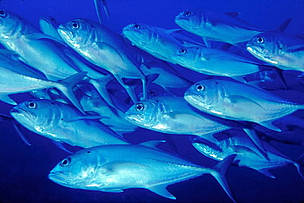 Fiji's marine resources, including fish, are important to customary marine owners who rely on the reefs for subsistence, livelihood and source of income.
© WWF / Cat Holloway

Dakuwaqa, the shark god, would have heard the ruckus coming from the small village of Naduri in a verdant corner of the Fijian archipelago on the morning of a new beginning.

Ancient fishing chants, many of which hadn’t been performed in more than 50 years, and a lavish feast of local delicacies — clams, seaweeds, taro leaves, mangoes, guavas, coconuts and pineapples — were prepared over days for villagers and visitors alike. A pig was roasted, graceful seasea fan dances and fierce spear dances enacted, gifts bestowed, kava drunk, and a whale’s tooth passed around for good luck.

All this for the opening of the country’s first marine protected area? Yes. That’s what a waitui tabu (prohibited zone) is these days, a cause for celebration, especially when it will protect parts of Fiji’s Great Sea Reef — the world’s third largest barrier reef and home to a staggering array of life, some still unknown to science.

Fiji is leading the pack of coastal nations by committing to the establishment of a network of marine protected areas (MPAs) by 2020. The area, covering 30 per cent of its territorial waters or 39 million hectares, will be the largest system of underwater sanctuaries in the world.

“Protecting the reef will ensure that one of our greatest assets remains intact and continues to be an important part of the traditions, culture and livelihoods of the people of Fiji,” said Etika Rupeni of WWF’s South Pacific Office in Fiji.

“Marine protected areas the world over are proving to be one of the most effective ways for coastal dwellers to safeguard their dwindling food supplies and preserve precious biodiversity.”

Damsel in distress
Captain James Cook, the 18th century British explorer who mapped the South Pacific, including Fiji, is often referred to as the founder of modern oceanography. Among his many discoveries was a linguistic one, the term “taboo” (or “tabu”) — a word that has traveled as widely as Cook himself and is now used throughout the English-speaking world. It still retains, however, its meaning in Polynesia — a prohibition imposed by social custom.

Waitui tabu, or prohibited fishing zones, have been set aside in Fiji’s Great Sea Reef to conserve the most diverse amount of species and habitats as possible. Covering more than 200,000km2, the reef — locally known as Cakaulevu — is home to thousands of marine species, including marine turtles, dolphins, sharks, and 43 new hard coral species. The reef is also an important fishing ground for local communities.

“If you see this place, you would consider yourself the luckiest person on Earth,” said marine biologist Aaron Jenkins, who dives regularly in the Great Sea Reef and is still awed by its extraordinary diversity of life. “The colours, the fish and coral, and most of all, what we still don’t know about it, are amazing.”

During a 12-day survey of the reef undertaken by WWF and its partners at the end of 2004, the team found a species of damsel fish (Pomacentrus sp.) previously unknown to science, as well as 12 threatened species, including 10 species of fish, green turtles and spinner dolphins. The survey also identified significant threats to the Great Sea Reef, such as overfishing and poaching by illegal fishers, poison fishing, sand dredging, and other development activities.

In efforts to protect the fragile environment, local village chiefs in Fiji have launched the first of the reef’s network of marine protected areas.

“It is important to look at a wider scale of management by capturing the interactions between a range of sites, protecting migratory corridors of more mobile species and maintaining ecological processes,” said Jenkins, the survey’s chief scientist.

“Marine protected areas are crucial. They are about preserving the integrity of the wider marine environment across connected systems.”

Protecting tabu areas
In a country where the abiding principle of veisolisoli and kerekere (give and take) is woven into the fabric of society, the concept of marine stewardship is considered common sense. But, years of overfishing, pollution, and destructive harvesting of live coral and exotic fish have eroded Fiji’s underwater paradise.

This is in addition to the plundering of Fiji’s genetic resources where important plant and marine species are being ripped out of the ground and sea for the highly profitable cosmetic, pharmaceutical, agriculture and biotechnology industries — often without the consent of local resource owners.

Efforts, however, are being made to reign in the free-for-all.

The creation of locally managed marine areas (LMMAs) are empowering coastal communities to take matters into their own hands. The Fiji LMMA drives community-based marine conservation by working closely with 40 traditional fishing grounds (qoliqoli). To date, there are 109 LMMA sites in Fiji, covering about 15 per cent of the country’s coastal areas. Witnessing the positive impacts LMMAs are having on local livelihoods, more and more communities are rushing to establish similar programmes.

The benefits of combining traditional and scientific knowledge and methods can be seen in one of the originating communities of this quiet revolution. The residents of Ucunivanua in Fiji’s Verata district, for example, can attest to the benefits of such locally managed areas. Lamenting the decline in the numbers of kaikoso (ark clams) — a key source of food and a marketable commodity — the community decided to take action by reviving tabu practices to protect breeding areas. As a result, clam populations have increased 300 per cent annually in these areas, and by 200 per cent in spillover areas. Incomes over three years have risen by 35 per cent.

“The fish in my protected area are so tame that when you dive down to count them they wink at you,” said one local Fijian fisherman jokingly.

“The underwater residents of my protected area are so happy that they practically flop themselves into the boat," said another.

Replenishing waters for future generations
A notable initiative from Verata is a bio-prospecting arrangement with a pharmaceutical company which has seen US$30,000 put into a trust fund to sustain local conservation work. Another community is managing its coral reefs and generating income by sustainably collecting “live rock” (dead coral or rock covered with algae that is used in aquariums to form a reef base for tropical fish) for the marine aquarium trade.

The Verata initiative and other projects have since merged to share information and resources in a Fiji-wide network of community representatives and NGOs, of which WWF was a founding member.

“The network story is truly an outstanding one, demonstrating how local communities, NGOs and the government can work together to improve livelihoods and protect one’s natural heritage, and indeed, a nation,” said WWF International President Chief Emeka Anyaoku, who presented the government of Fiji and local communities with WWF’s Conservation Leadership Award.

“As a small island state we are equipped with a special sensitivity that makes us keenly aware of environmental changes,” added Fiji’s Fisheries Minister Konisi Tabu Yabaki. “We, just like our forefathers, know that if we do not maintain the health of our environment, our way of life will be threatened. Waitui tabu simply makes sense.”

WWF is working in the world’s most sensitive and biologically diverse regions to help protect ocean habitat and support commercial fisheries. The global conservation organization is establishing individual marine protected areas and ensuring that they are supported by local people so that they can be managed effectively. Each park fits into a network of protected areas that represents the diversity of habitats within a given marine ecological region.

“The community is grateful for the support,” said Chief Ratu Aisea Katonivere of Macuata Province. “We hope it will begin the journey to bring back the richness of these once plentiful waters, not only for ourselves, but also for our children.”

*This feature was prepared by the press department at WWF-Australia

• The islands of the Fiji archipelago, which number more than 300, are scattered over a 1.3 million sq km area and are part of one of the largest and most extensive reef systems to be found. More than 98 per cent of Fiji’s territory is ocean and more than 80 per cent of Fiji’s 800,000 plus residents live along the coast. Fiji’s economy depends heavily on its foreign exchange earnings from fisheries and tourism. Fiji's marine resources are also important to customary marine owners who rely on the reefs for subsistence, livelihood and source of income.

• Dakuwaqa is the guardian of the reefs and is revered as a god of seafaring and fishing communities in Fijian legend. In his honour, all sharks were saluted when seen and it was considered tabu to eat shark flesh. When canoes passed over areas where Dakuwaqa was known to frequent, cups of yaqona and morsels of food were thrown overboard to gain his favour.

Fiji's marine resources, including fish, are important to customary marine owners who rely on the reefs for subsistence, livelihood and source of income.
© WWF / Cat Holloway Enlarge 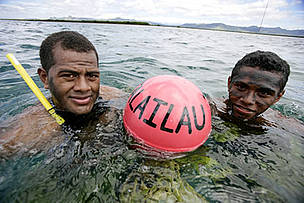 Fiji is famous for its spectacularly rich and vibrant soft coral reefs. By 2020, at least 30 per cent of Fiji’s oceans and coastal waters will become part of a national network of Marine Protected Areas.
© WWF / Cat Holloway Enlarge 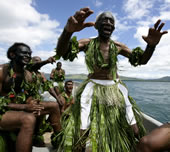 Cheering by Naduri villagers after the dropping of the buoy that marks the boundary of the new marine protected area on the Great Sea Reef.
© Brent Stirton / Getty Images / WWF-UK Enlarge 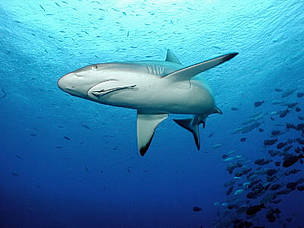